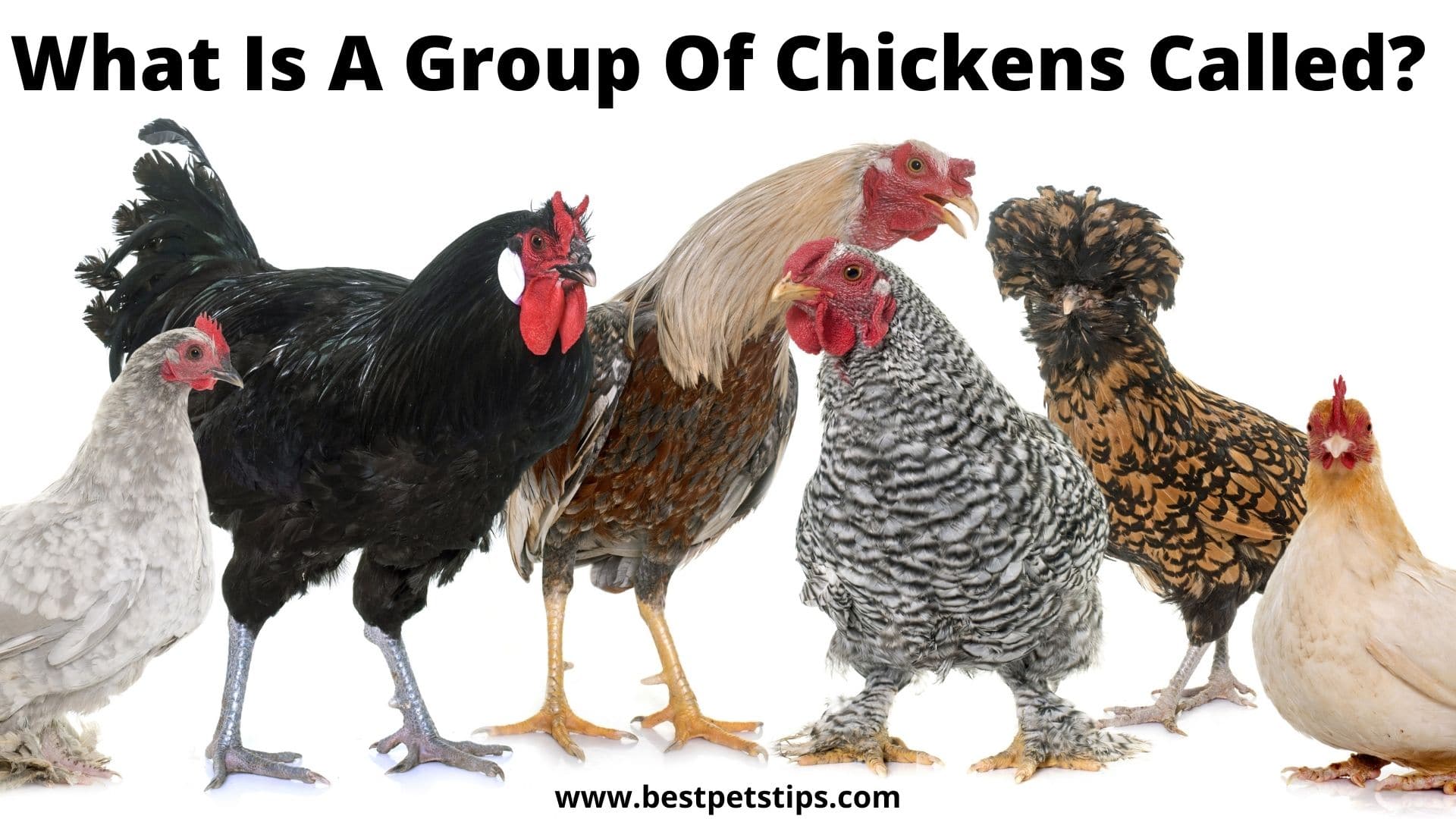 Do you love chicks and want to learn more about them. So what is a group of chickens called? The answer is a flock. Group of birds is also called the same. But the group of roosters called as brood. If you want to know about all chick facts, then you are on the right page.

Chickens get raised in a coop. And their group is called a flock. If there are two coops, then there are two flocks. New members might get added or subtracted from the flock. If a new member gets added, it will take less time for that new chicken member to adjust or adapt to the new group.

Isn’t it a wonderful and colorful sight to see all chickens together and picking on something? They all are seen as showing integrity, and they all are so cooperative than us. So if you want to learn more facts related to the groups of chickens and about chickens, then keep reading.

What is a Group of Chickens Called?

Brood is a group of chicks raised together by the same mother. And the clutch is the eggs laid in a group. Usually, a clutch consists of 12-15 eggs.

And lastly, a peep is a petite chick that comes out of an egg or when the egg gets hatched. They peep when they come out of eggs, so they are called peeps.

What is a Baby Chicken Called?

And they both are identified by the same name. When chicks are in a group, the group of chicks that just hatched by the egg is called peeps.

Also, when the chick grows a little, their names get changed according to their sex group. A female chick, after some time, is called a pullet. Young male chicks are called cockerels.

What is a Male Chicken Called?

You can quickly identify an adult male chicken by looking at its body features. Male chickens usually have a giant comb and wattles. Also, they have long-tailed feathers. Also, they crow much more than a hen.

Okay, so a male chicken is called a chick when it’s small, a baby. Chicks are the youngest chickens. But when a chick is 4-7 weeks old, it is called a cockerel for up to a year. Cockerels are young male chickens.

When cockerels grow and exceed a year, then it is known as cock. Cock is an alternative term for rooster. Roosters are giant-sized and bright in colors. They weigh a lot, and they are adult male chickens.

What is a Female Chicken Called?

When a chicken is a female baby chick, it is called a pullet. Pullets are young chicks. Pullets don’t start mating. But when the pullet grows and becomes a year old, then those are called a hen. Hens are adult female chickens with the ability to mate and produce eggs.

Are Chickens Sociable in a brood?

Yes, chickens are friendly in a brood. Chickens are social creatures; they do not like to be alone. These chickens are amiable and pleasant. When a chicken isn’t paired with a group or breed, they feel lonely.

They like to peck, best and roam together in a group. Chickens are sociable creatures. In the wild, chickens in a flock consist of several hens, submissive male chickens, and an alpha rooster.

They all like to be in a group. Rooster always tries to protect hens and baby chicks in a group.

What Is A Group Of Roosters Called?

Usually, hens get along with their same-sex group quickly, and they show a friendly attitude. But roosters do not get along with other roosters. They have a protecting attitude towards their space and over the hens.

They aren’t ready to share their territory and hens with other roosters. So, the name isn’t there for a group of roosters because there isn’t a need to have a name, as they don’t live together in a group.

Even if roosters place together, they will fight and kill each other to get the position of an Alpha rooster.

What Is A Group Of Birds Called?

There are different names for different species or groups of birds. But the most famous and used collective name for a group of birds is a flock. Flock is generally used to name the birds in a group.

Let it be a large or smaller group; they are all known as a flock, irrespective of the species type. But there are names for different species, but when we call a group of birds, it is called a flock.

What Do You Call A Group Of Birds Flying Together?

How Many Chickens Are Needed To Create A Flock?

Chickens do not wish to live alone. It would be best if you placed chickens in a flock because they are flock-oriented birds. The minimum number of chickens should be in a group to create a flock is three. It will vary from three to five.

There should be these amounts of chickens to create a flock. But in the wild, it is dozens of hens. Because the flock needs several hens and a rooster, a flock usually should consist of three chickens.

And the maximum is according to your ability to nest the chicken. It can even be a bunch of hens.

What Is The Name Given To A Group Of Ducks?

Ducks are social creatures. They are always seen in a group. They are found swimming together, enjoying themselves together. Well, there are many collective nouns for the group of ducks.

The collective noun differs for the area of ducks seen in a group. If a duck is found together on the ground, it is called waddling. When they are on a flight, like every other bird, they are called a flock.

What Is The Name Given To A Group Of Turkeys?

Turkey’s are beautiful creatures. They have a royal appearance. If you love birds, you will surely fall in love with their beautiful personality. You might have come across different types of turkeys in social media or real life.

There is no doubt that their beautiful personality flabbergasts us. Well, usually, a group or bunch of turkeys is called a flock or gang. Flock is a usual collective noun for the group of birds.

But those turkeys that are in huge numbers and poultry breeds are often called rafters. Rafter can only be used to describe a tame group of turkeys. Meanwhile, there are also other terms as a brood of turkeys and a dule of turkeys.

What is a group of chickens called?

In the case of an adult group of chickens, they are called a flock. Flock is usually used to describe any group of birds. It is a collective noun for almost all birds who live in a group.

Even in the case of chickens, they are called flocks when they are in groups. It is quite a beautiful view to see all the chickens together. They peck and play together as chickens are sociable. They bond with each chicken in their flock.

What is a group of baby chickens called?

Meanwhile, there is also a term called a brood, which describes the group of chicks hatched from a broody hen together.

What is a collective group of chickens called?

What is a group of prairie chickens called?

Chickens are tasty to the tongue and colorful to the eyes; a group of chickens or birds moving together is a beautiful sight.

Typically, all most every group of birds is called a flock. There are also various collective nouns to describe various species. But typically, flocks is the most used term to describe a group of chickens.

However, there are also many terms such as peep, clutch, brood, etc., depending on the age and territory of chickens.

How many are in a flock of chickens?

There should be at least three chickens to get called as a flock. You can collect many eggs from these chickens and create a big flock. However, maintain a minimum of three to five flocks to get a better income. A group of chickens below the number of three isn’t called a flock.

How many chickens make a brood?

Well, some bantams or broody hens can only cover three to four regular-sized eggs. Meanwhile, some can cover a large number of eggs. Typically, brood is a terminology used for a group of chickens hatched and reared together by the same hen or mother. It can be two or eight numbers. Two to eight chickens can make a brood.

What is a flock of chickens?

What is a group of male chickens called?