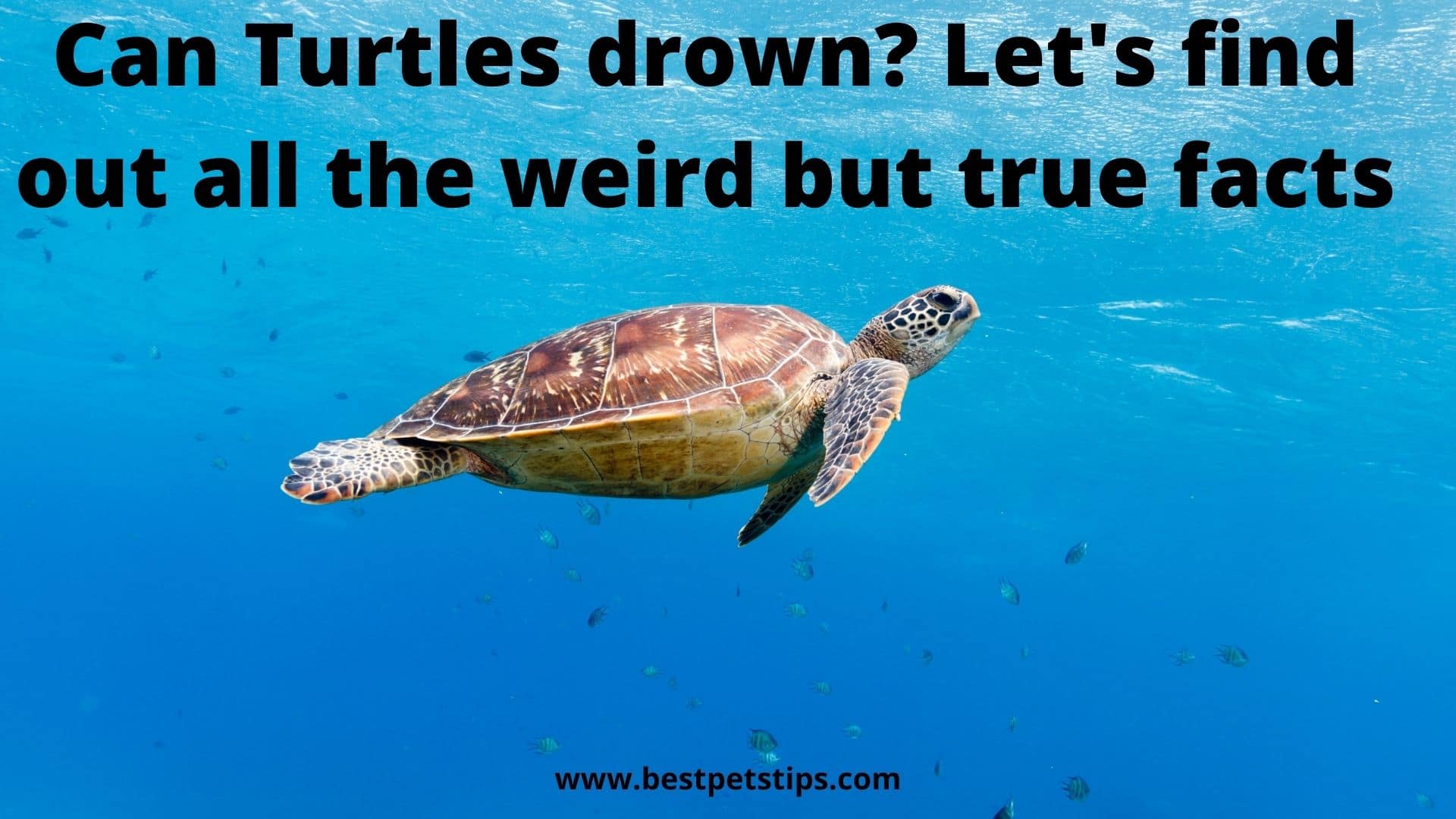 Can Turtles drown? When it comes to turtles, how long can they hold their breath? Come learn the CRAZY truth about how long a turtle can survive underwater by engaging yourself in this article.

Turtles are a species of reptiles known as Testudines and are distinctively characterized by a shell created from their ribs. In the present era, turtles are categorized into two major groups, Cryptodira(hidden necks) and Pleurodira(side necks), differentiated by the retraction of heads.

An average lifespan of a turtle is 40 years. They reproduce by laying eggs annually on the land and in 3-4 year cycles. Turtles are omnivorous and amniotes(breathe air and don’t lay eggs underwater).

They are underwater living creatures but also can drown. It’s weird.

Water pollution is the most common cause of turtle drowning, with growing pollution levels in the water finally burying them in debris and making it hard for them to get to the surface for air. Let’s find out the truth about how an aquatic creature can probably die in its habitat.

Despite living most of their life in aquatic regions, sea turtles can drown as they have lungs, unlike all other marine creatures, which use gills for breathing underwater. Sea turtles fail to breathe underwater but can hold their breath for longer durations. Drowning is a widespread phenomenon in turtles due to their slow lifestyle.

How do Turtles drown?

They require a surface to breathe as they are air-breathing reptiles and can hold their breath for several hours but only under certain circumstances. An inactive or resting turtle can stay underwater for 4 to 7 hours.

Whereas if it gets entangled in a fishing net or hook, it panics and overuses its stored oxygen and can sustain only up to a few minutes. Also, researches show that turtles can hibernate underwater for months! Isn’t it great!

What to Look for in a Dead Turtle?

Turtles can be inactive for few hours easily. But if they remain steady for a long time or show signs of paleness, foul smell, rotting flesh, and a cold body, then the turtle indeed is dead and can’t be revived.

Turtles begin to show signs of foul-smelling gases releasing from the decomposed body. this is due to microorganisms feeding on the tissues of the dead turtle. This rotten flesh odor is the first clue of the turtle’s death. It generally takes a few days for the putrid stench to start arising.

Turtles adapt to the slow respiratory process and breathe air with very little oxygen consumption and are endothermic, which makes them prone to sudden deaths accounting for respiratory issues and can eventually show signs of pale and cracked skin, rotten flesh, and disambiguated body structure.

What is the average time taken for a Turtle to Drown?

They are tiny creatures who swim at a slow pace. That’s if, under any circumstances, they fail to reach the surface to breathe. They may drown and die. As we saw earlier, they can stay underwater for minutes, hours, or even months, depending on the situation, so we can’t precisely predict how long it takes for a turtle to drown.

How Long Does A Turtle Have After Drowning?

Their respiratory system functions at a prolonged rate, due to which they can remain drowned and unconscious for hours and can come back to life even until the next day. They may seem dead because of the inactivity, but their internal system would still be working, and no signs of body decay would appear.

How to Revive a Drowned Turtle?

Initially, CPR or a procedure to reactivate its cloacal Respiration could help regain its consciousness. But taking it to the vet would be the next option, or it may get worse. Turtles have very delicate organs and need immediate gentle treatment.

Yes, baby turtles are more likely to drown than adult turtles because of their weak legs to swim constantly and inexperience in assessing their oxygen needs. If they get tired while climbing up their basking docks to breathe, they possibly may drown.

Turtles have lungs instead of gills; breathing can’t extract oxygen from water and use it for breathing. However, suppose they are inactive or hibernating and need a minuscular amount of oxygen from water. In that case, they can absorb dissolved oxygen using their papillae which is an unusual technique and doesn’t help if the turtle needs more oxygen to swim actively.

How Long Can Turtles Stay Underwater?

It can stay underwater depending on its level of activity and can range up to months for hibernation or a few hours daily. Its whole life is spent in aquatic surroundings. That’s why it eventually gets adapted to the habitat.

Can a Sleeping Turtle Drown?

No, while sleeping, turtles utilize their stored oxygen at a very steady rate and stabilize their internal systems at a slow pace which enables them to spend a long time underwater and minimizing the possibility of dying in sleep as they are conditioned naturally to wake up and refill their oxygen before they plan to swim actively.

Basking docks are high surfaces beside water bodies. Turtles come out on them to breathe and dry their bodies. The creation of a proper basking dock for turtles is necessary if you have them as a pet or else if in the natural habitat, ensure there is a proper safe place for turtles as a basking area. It should be easy to approach. It also should be elevated enough even if the water level rises.

Turtles are prone to sickness, just like humans. Sometimes they can develop serious health issues, which a vet must examine immediately to avoid complications. The following mentioned medical issues are to be watched for in a turtle and should be consulted for better treatment.

Turtles breathe air through the lungs and live underwater. Therefore the chances of a turtle drowning are more than any other illness. The most important thing is that ever to turn the turtle upside-down when you suspect it’s drowning. This would complicate its revival and maybe would die sooner.

Infections in the Respiratory system

Respiratory infections are a kind of common cold in turtles that are pretty dangerous and, if untreated, can convert into pneumonia and further minimize its chances of survival. Respiration is an essential process in a turtle.

Similar to fishing nets, messed-up weeds and other sea shrubs could entangle the turtle underneath, and it may die by suffocation eventually. Deep dives can be fatal to turtles.

Turtles are very clumsy, due to which they flip upside-down several times and then struggle to get themselves up, which causes quick depletion of oxygen in their body. It triggers anaerobic Respiration producing lactic acid instead of oxygen. Lactic acid is toxic to turtles, killing them eventually of asphyxiation. This proves to be a common way to die in turtles.

Choking on food, debris in the habitat, playthings in the aquarium, plants, etc., is possible to happen to turtles. They get frenzy while swimming deep underwater, and reaching to the basking dock for oxygen becomes difficult, sometimes resulting in drowning.

Red-Eared Sliders are a subspecies of semiaquatic turtles. They are a common choice of people as pet turtles across the world due to their overpopulation. Yes, like all the other turtles, they too can drown as they don’t possess gills to breathe underwater.

How Much Time Can Red-Eared Sliders Spend Underwater?

Red-Eared Sliders have a pretty sorted lifestyle. They spend 75% of their life underwater and the rest 25% of it breathing air and drying their skin/shell under the sunshine on the basking dock. It can stay several hours underwater in a day swimming.

The Purpose Of Cloacal Respiration In Red-Eared Sliders/ Sea Turtles?

Cloacal Respiration is a technique used by various species of turtles in which gas exchange takes place in the posterior cavity to supply oxygen to the bloodstream and diffuse carbon dioxide out. It’s their primary source of oxygen during hibernation. This technique is commonly known as butt breathing.

Box Turtles are a species of turtles that slightly resemble terrestrial tortoises. That’s why they drown more easily and quickly than other aquatic turtles. They are pretty slow and heavy compared to sea turtles.

Do Turtles Breathe During Hibernation?

During Brumation or Hibernation, turtles breathe their stored oxygen in a controlled manner to sustain their deposits and perform cloacal Respiration to compensate for the maximum source of oxygen. The minimal need for oxygen is the reason turtles can hibernate quickly.

How To Prevent Turtles From Drowning?

The only way to minimize turtle deaths due to drownings is to keep our seas and oceans free of pollution and fishing material/plastic garbage that would entangle them and kill them eventually. Building proper basking docks for pet and domestic turtles would also help a lot.

This unnatural association between Turtles and Drowning is talked about in this article as it’s pretty unusual for an aquatic creature of our knowledge which has its habitat as oceans/seas and spends most of its lifetime swimming, can also die by drowning; moreover, it cant breathe underwater. This sounds pretty similar to a human who can’t breathe air despite living on land.

Approximately what is the time taken for a turtle to drown?

Depending on the situation, it could happen in few minutes or maybe several hours.

Does A Turtle Float When It Dies?

Yes, after 16-32 hours of its death, a turtle starts to float until decomposition.

Can Turtles Survive In A Frozen Pond?

No, turtles cant survive freezing temperatures and will die due to an imbalance in the ecological levels.

Will Turtles Die If Not In The Water?

Turtles can stay without water for a couple of days. After that period, they would face serious digestion issues due to the absence of water and eventually die.